‘Look closely and as the children build their sandcastles, the battleships are massing on the horizon line…’

Gaston loved technology and clearly adored to take photographs. They show a privileged, wealthy and happy family at leisure – so poignant when, as readers of Major Tom’s War will know, fate has other plans in store for Gaston, Louise and their four children.

At heart the Derome family were farmers. Their agri-business, the Engrais Derome, was already seeing some success in the earliest years of the 20th century, but it was still rooted in the fertile family land in and around Bavay. This old lady (possibly Gaston’s mother) is feeding poultry.

Beautiful Louise Derome has had her first child, a little girl, Thérèse. Note the wallpaper, the bassinet with lace hangings, the quilt, the beautiful bed and the vase of flowers.

Gaston looks as thrilled as any father with his little firstborn. This would have been taken in the garden of their Rue des Juifs town house.

Gaston breaking up ground, perhaps in his vegetable patch, much to the delight of a group of chicks.

Louise and Thérèse enjoying a quiet moment on the daisy-studded lawn – possibly even a picnic in the woods.

Gaston on horseback. And the horse’s name was…

…unbelievably, Daisy. Why his horse A. has an English name and B. the same name as one of Tom’s horses history does not relate, but this is long before Tom and Gaston met.

Louise (or is it their young English friend Watsie, the future ceramicist Dorothy Watson?) with Thérèse and baby Alphonse. Could it have been Watsie who named the horse Daisy? 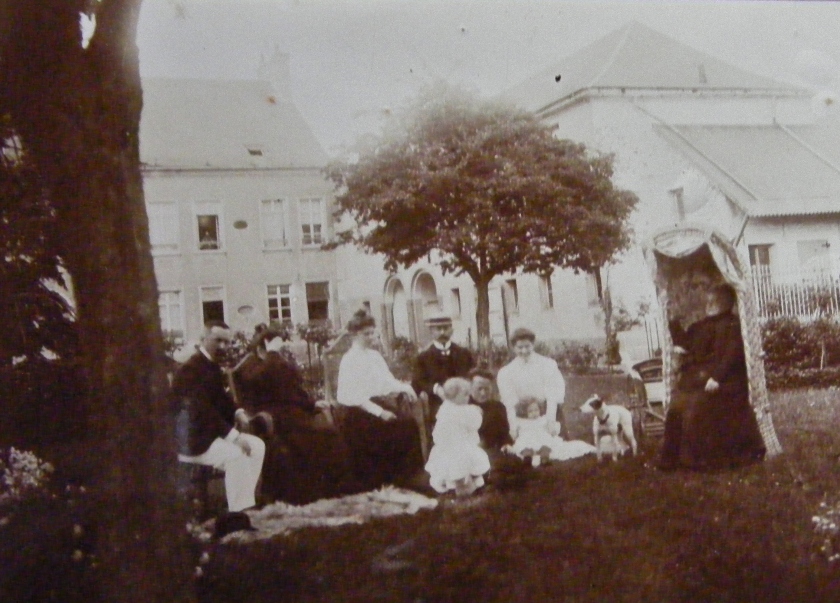 Rather a stilted family shot taken in Rue des Juifs – the wicker parasol over Madame Derome senior is rather splendid. Louise looks as though she is expecting again, probably her third child, Léon.

Business is booming and a huge new factory is being built. This is likely to be the building used as a billet by troops of both sides during the war, and where Tom spends the nights of 7/8/9 November 1918.

This photograph was taken near Volvic – was Louise perhaps taking the waters there after the birth of her third or fourth child? 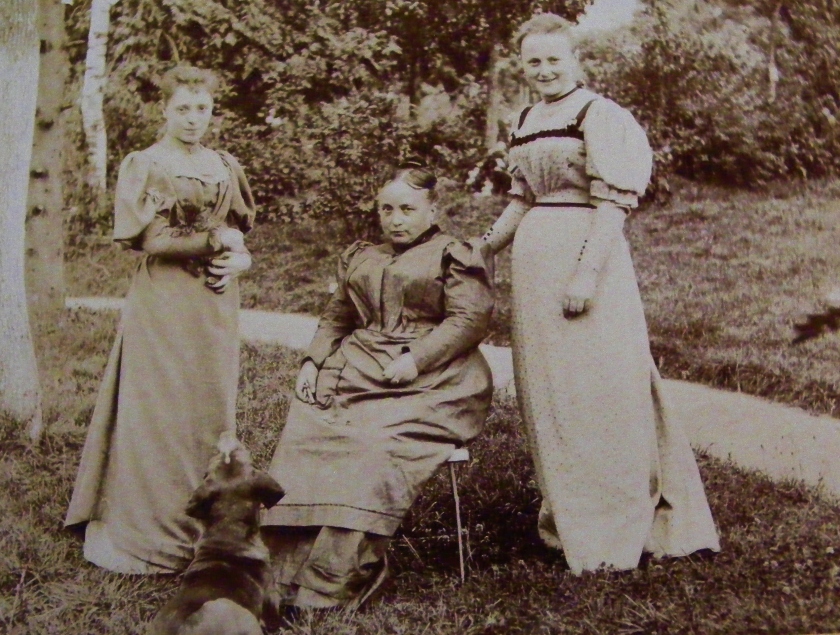 Another good portrait of Léonie, right, but the identity of the other two family ladies is not known. No Louise, unless she was taking the photograph.

These photographs taken in the garden at Rue des Juifs show the younger children entertaining themselves but Thérèse is now clearly wearing black and the adults look sombre. Was this taken just after the funeral of Louise, who sadly died in childbirth?

The clouds of war are gathering on the horizon. There is a sense of the family pulling together to take their children for a healthy seaside break on a windy day just before the calamity unfolds. Alphonse has scrambled up the wall, Léon following suit.

The four children – Thérèse, another cousin, possibly little Marie-Félicie, Léon (on the sandcastle) and Alphonse face a rough incoming tide.

Beyond Gaston’s children and their cousins, battleships mass on the horizon. 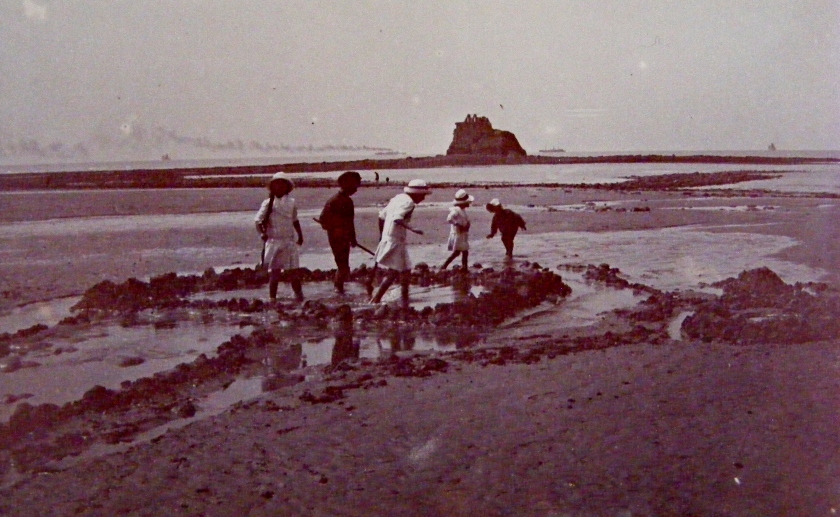 The following week, the First World War will begin and their little lives will be changed forever.

Hello new readers. If you enjoy my blog why not try my prizewinning novel of WWI, Major Tom's War? It's available as a revised and expanded second edition in paperback and on Kindle. You can order it via my lovely publisher Kashi House at www.kashihouse.com or from any good bookseller. View all posts by veewalkerwrites

One thought on “WARNING – if you have read Major Tom’s War these images may make you cry. Gaston Derome’s family photographs circa 1902 – 1914”