‘Closer inspection revealed… dark, surprising and tragic secrets, which provided the release I needed to begin again and write Major Tom’s War as a novel.’ 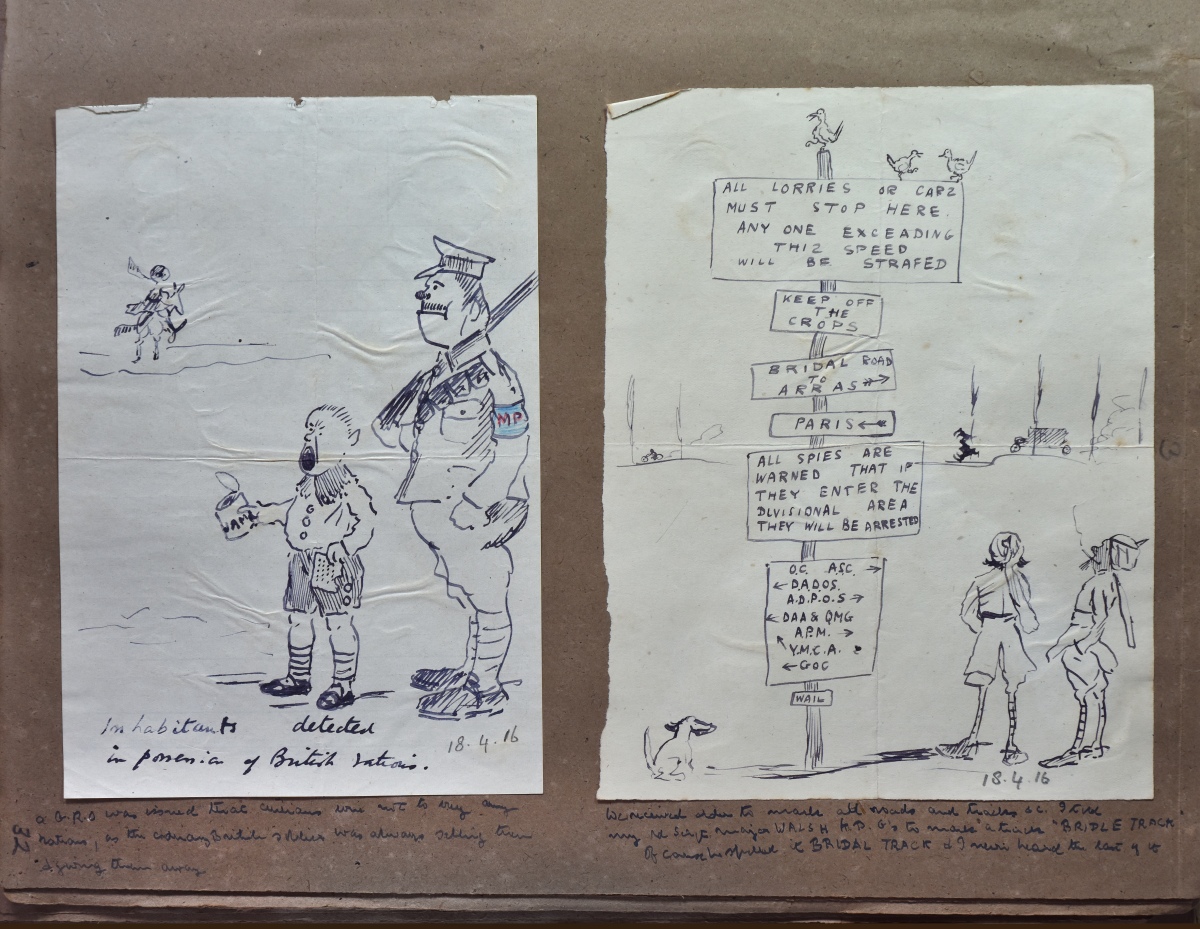 My mother first showed me the fat, dog-eared, faded-pink album in the early 1970s. My grandfather’s First World War ‘diary’ looked like one of the family photograph albums I already loved to leaf through on rainy days because, like those, it had been made by my clever grandmother Evie, from card and cloth and glue.

Tom’s war diary is more of a large scrapbook really, into which Evie carefully assembled typed-up versions of his letters, photographs, cartoons (like the ones shown here) and other war-related material collected by him at random during 1914 – 1919.

As a child I looked only at the pictures of fine horses and alien, stiff, uniformed men with bristling moustaches. Deciphering the fading typescript and cramped annotations was beyond my capabilities then.

In 1975 or thereabouts an inspirational history teacher at my school, Fortrose Academy, John D. Campbell, legendary for his classroom digressions which were always even better than his lessons, introduced us to the First World War. Mum retrieved the diary from my aunt’s cupboard and I brought it into school, feeling a frisson of pride when John D. spent most of one class reading aloud from it. With fine joined-up thinking the English department of Fortrose Academy then gave us the War Poets: Sassoon and Brooke, Owen and (especially) Edward Thomas have been my companions through life ever since.

I found myself working for the Imperial War Museum in the mid-1980s and showed the diary to Phillip Powell the librarian there. He asked leave to copy a few unusual and shocking sections from it to the museum archives: these brief extracts have already appeared in a few non-fiction works on the Western Front.

I must add here that geneaology is a shared family passion and my sister Steph and cousin Pippa are the joint custodians of a great deal of family archive material.  When my own daughters began to study the First World War I remembered the diary and borrowed it back from Pippa to show them.

All this happened to coincide, for various dull reasons, with a convenient period of acute insomnia and so for something to do in the wee small hours, I began to transcribe the diary from beginning to end.

This soon became a compulsion which threatened to take over daily life. There was far more to the diary’s content than I had realised and this was almost certainly the first time that anyone had read all of it in detail (with the exception, probably, of Phillip Powell) since my grandmother had created it in 1919/1920. I also translated the documentation in French contained within, with a startling outcome (more on that in another blog). Action within the diary unfolds in England, India, Belgium and Germany as well as France and I caught my first glimpses of the many characters who will share your journey through the pages of Major Tom’s War.

There were also envelopes of letters. Reading these alongside the content of the diary made me realise that Evie had ever so slightly edited Tom’s stories, but why? Finding a stuck-down entry and steaming this top layer off to find a shocking story she had typed up then thought better of hidden underneath gave me the answer.

Once I had completed a version of the diary/letter content in Word for people to read, Pippa, Steph and I agreed that we should digitise our grandfather’s diary as a safeguard, which would allow its content to be easily read by future family members, historians and others. The result is http://www.majortomswar.com which combines the archive sources with complementary material on the book, including chapter notes.

I finally began to write Major Tom’s War as a work of non-fiction around 2009 but soon found that Tom’s voice alone was not enough to sustain it. I became immersed in work and family and gave up for a time. My grandmother’s voice in particular was missing, I felt, and I suspected either that her letters to Tom had all been lost in France; or, more likely, she had considered them of no interest to posterity and binned them.

About three years later the diary summoned me back. Sure enough, among a brown envelope full of loose letters and photos, I found a single surviving second page of a very different kind of letter from Tom which I have included in the book: an agonised crie de coeur at Evie’s rejection. Why?

Closer inspection of the diary itself and other archive documents began to yield some dark and tragic family secrets. This helped to provide the release I needed to begin again and write Major Tom’s War as a novel. It is a fact-based work only lightly dusted with fiction. Many of the words of Tom and others are used verbatim. Perhaps it is the beginning of a new genre, family history fiction?

Major Tom’s War was published by Kashi House in London on September 21st 2018 (no random date, but more on that another time), in a beautiful hardback first edition.

I must thank Parmjit Singh and his dedicated publishing team for taking on such an unusual project (and its eccentric author) and for being prepared to produce it against the clock during 2018, as a commemoration of the centenary of the Armistice, just as in had hoped.  If you need to purchase it online you can do so direct from them at http://www.KashiHouse.com.  As a non-profit publisher which is part of the UK Punjab Heritage Association they would really value your support.

Thank you for reading my first-ever blog.  Feedback and questions always most welcome. It will be good to have company at last, as the working life of an insomniac writer can often be a very solitary one.